It's been nearly three months since we have launched our beta version of TeacherBot. Over the next couple of weeks, we'd like to share with you our experiences with TeacherBot to help make Official Accounts more informative, fun, and engaging. 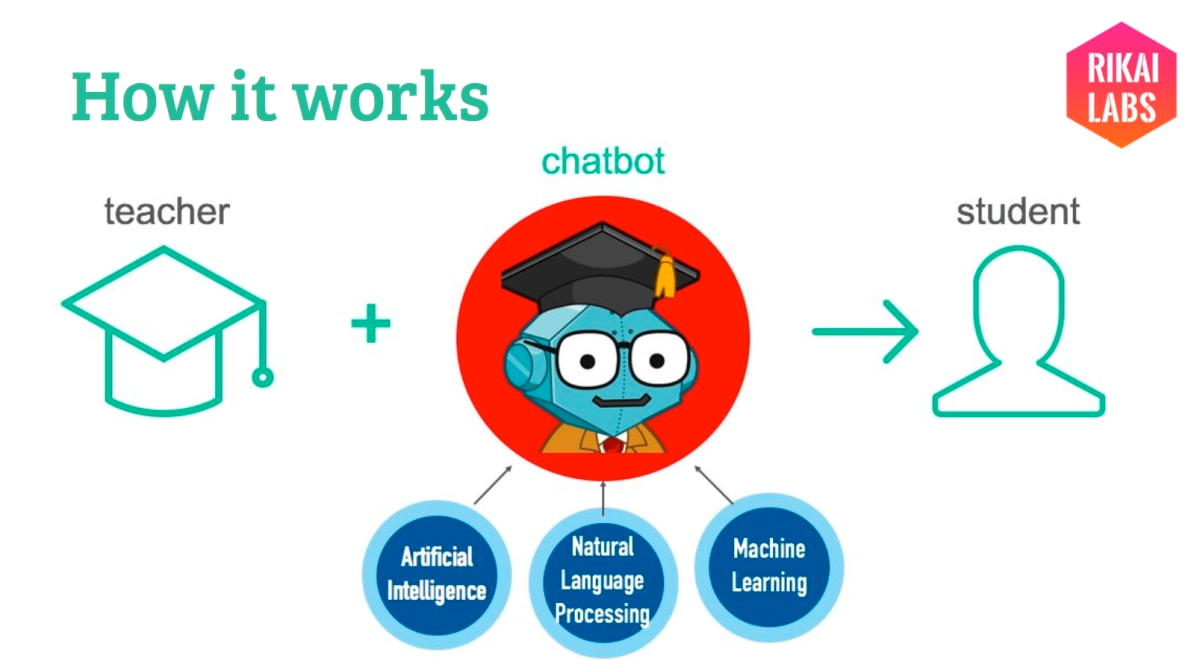 TeacherBot is Rikai Labs' original official WeChat account. The TeacherBot experience blends live teachers with our chatbot engine powered by natural language processing and machine learning. TeacherBot lessons are built around role play conversations so that users have to practice communicating with TeacherBot.

When we initially started on TeacherBot, we assumed that chatting to TeacherBot was going to be natural. After all, people chat in WeChat all the time. 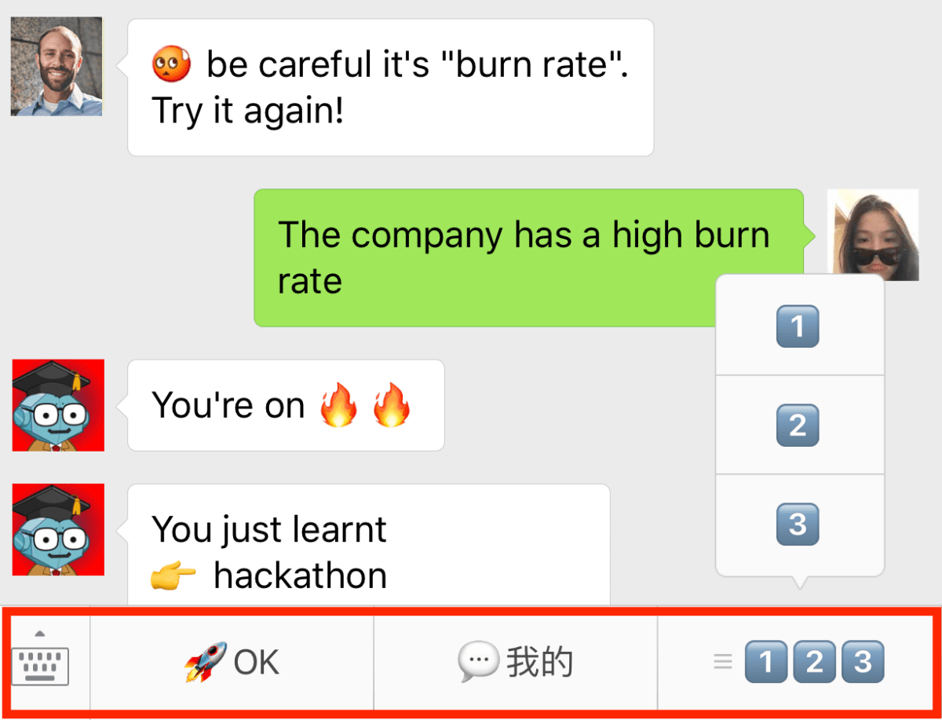 We couldn't understand why people weren't chatting with the chatbot, so we started to watch new users and their habits. We found that the first thing most people did when they started with TeacherBot was to push all the menu buttons at the bottom of the screen to find out what the account was publishing.

In fact, the average user pressed the menu buttons 4 times before they ever said anything to TeacherBot. Our students were expecting to read an article or a blog post, not to chat with TeacherBot.

So, it turns out that our initial assumption was dead wrong. Users were NOT going to just start chatting with TeacherBot. We were going to have to figure out how to change our both our customer's habits and expectations with the menu buttons.


Nothing so needs reforming as other people's habits.- Mark Twain


To break people of the habit of mashing the menu buttons, we decided to try two things:

From a purely educational stand point, removing the menu buttons all together would actually increase learning outcomes. TeacherBot was designed to be an opportunity to practice conversation through chat. We felt that removing the menu would force students to chat and engage in the role play experience.

But what we found was that the menu was foundational to user interaction in ways we did not expect. No menu meant no user activity. While we did see a dramatic increase in lesson completion among the few users who did actually begin to chat with TeacherBot, when most users didn't see a menu, they didn't understand what to do.


Altering the behavior of the menu

Next, we altered the behavior of the button to be dependent on context. The student would get different instructions, or might just be moved along in the lesson, depending on when they pushed the button in the user journey.

In our initial onboarding, if a user pushed the "Progress" button before we wanted them to, we changed the button behavior to instruct the student to type in a response, rather than link out to an H5 page that tracks their progress.

Ultimately, we found that in altering that behavior of the button, we were able to reduce the number of times that a user pressed the menu buttons from 4 times to 2 times within the onboarding lesson.

But more importantly, we were able to achieve our initial objective of getting users to chat. After altering how the chatbot responds to button presses, we found that our lesson completion rate increased from 35% to 82%. 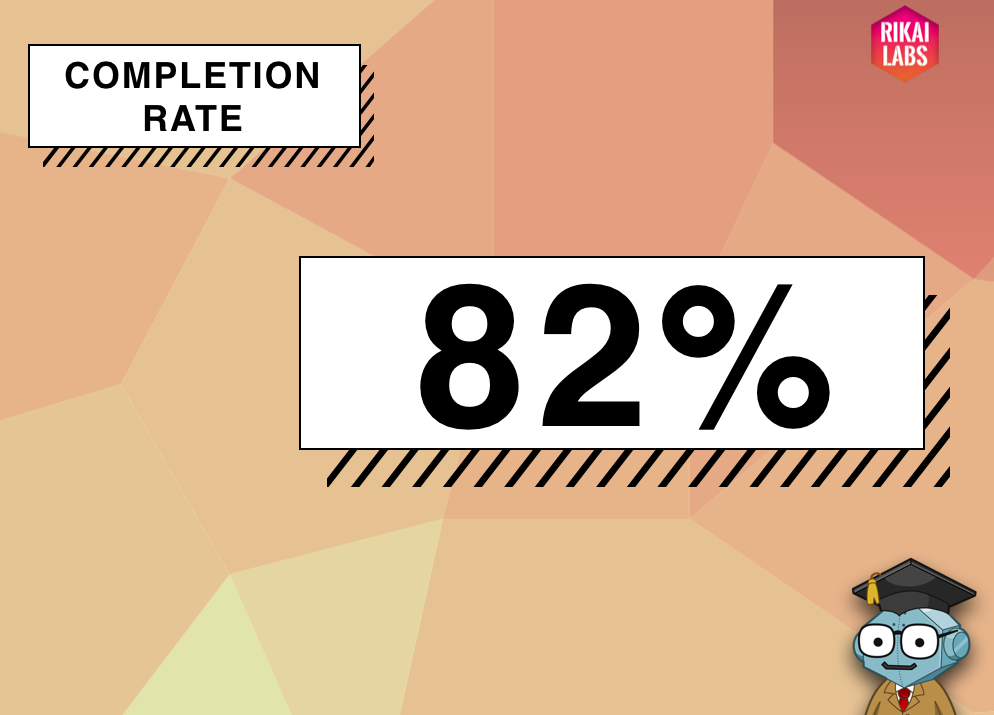 We've learned that it is much easier to change button behaviour than user behaviour. Now we're experimenting with new ways to make our menu buttons more relevant and useful for users. In the next couple of weeks, we plan on rolling out:


So how does this help me?

When people follow your WeChat official account, you have their undivided attention. They are seeking information, and until now, most people get this information by pressing menu buttons.

At Rikai Labs our WelcomeBot chatbot solution helps companies and brands to engage, educate and convert users in ways that are up to 500% more effective than just using menu buttons and H5 pages.

But part of what makes WelcomeBot effective is that it embraces existing user habits and nudges users towards new behaviors using a familiar interface. By altering the behavior of the menu bar, companies can ensure greater user engagement and conversion of their users in their WeChat account.

Try TeacherBot today or chat with us at info@rikai.co. We'll be happy to discuss more user experience insights with you. 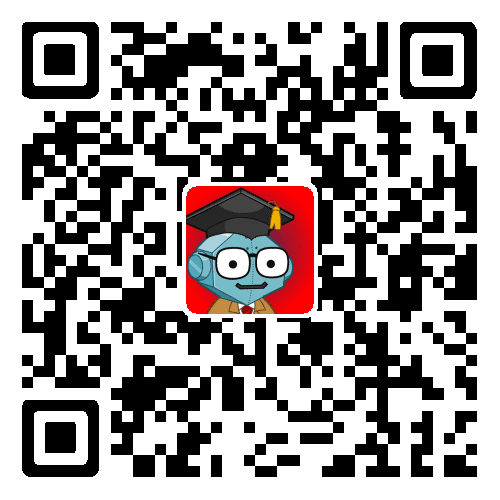